With sincere apologies to Walt Whitman, I commend to you an autobiographical sketch recorded with Shawn Wildermuth in late December 2013 as part of his “Hello World” series of developer interviews.
It covers my early years as a Knucklehead Programmer which was kind of like Wolf of Wall Street minus the money, blow, and hookers.
Shawn and I do have a darned good time talking about programming in the 70s/80s (APL, big iron, life before PCs and RDMS), people who changed our lives, and what we can do to nurture the developer community.
Go subscribe to Shawn’s series so you can listen to a great cast of developer characters talk about how they got started in this game.
I wonder if Shawn will interview himself :-)

Shawn included a few links on his page but I thought you might like a few more with my memories attached.

Steve Dunwell, the IBM Fellow, lead architect and manager on the pioneering STRETCH computer is remembered in this article, “Return of the prodigal son: the rehabilitation of Steve Dunwell”. His passion for educational computing made my introduction to computing possible at a time when “computers in the schools” was almost inconceivable.

APL, my first programming language and my source of income for two decades. Here is Conway’s Game of Life in a single line of “write once, read never” APL:

Look Ma! No Loops!
We loved it.  We owned our own 16Kb slice of an IBM/360. No overseers. No types, No compiler. Cult language. We rocked.
My first “computer” was actually an IBM/360 connected by a private telephone line and acoustic coupler to this 2741 terminal, a modified Selectric typewriter.

The Selectric Typewriter printed with a typesphere that rotated and tilted for each letter before striking a ribbon and the paper behind it (see video). IBM made a special typesphere to print those weird APL characters: 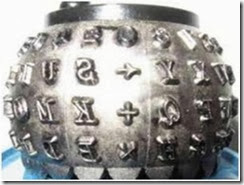 My first green screen terminal was a 3270 display. It was roughly the size of a foot locker and must have weighed  more than 50 pounds. The manual was over 100 pages. The character set was IBM’s own EBCDIC; ASCII was an option but I don’t remember seeing ASCII actually installed. A bigger, heavier color version arrived with the 3279 some years later:

History of the Relational Database

I talked some about the early history of the Relational Database when it was fresh and exciting and how it had to overcome the predominate database architectures of its day (architectures we’d now categorize as “NoSQL” ). Did you know that it was invented at IBM by E.F. Codd. and that IBM suppressed it for almost a decade? Read all about it in this fascinating interview with C.J. Date.  It’s a PDF. You’ll learn that Codd wrote an early relational database query language in APL (p.28) and that he hated SQL.

I talk briefly about my time at Community Memory one of the earliest experiments in social networking.

The technology was a bunch of teletype terminals in Berkeley laundry mats and record stores, connected by phone lines (no internet). What fascinates me to this day was how CM’s vision of social change through social networking both did and did not happen. You get some sense of that from this BBC article “Hackers and hippies: The origins of social networking” And that’s enough of that!

Stop what you’re doing and learn right now about the next generation of Durandal. Watch the video (just 25 minutes) to see how intuitive and easy it is to build a nextGen Durandal application. Then push the “Back This Project” button and help fund it.

Full Disclosure: I have no connection with this project. I just like it a lot. And I put my money where my mouth is.

At IdeaBlade we’ve been big fans of the Durandal presentation framework for building Single Page Applications (SPAs) in HTML and JavaScript. Durandal has served us (and our clients) well for over two years and today’s Durandal deserves its place among the top SPA frameworks. There are lots of ways to learn about it, none better than John Papa’s Pluralsight course, “Single Page Apps JumpStart”.

Durandal’s author is Rob Eisenberg, known to many of you as the man behind the Caliburn.Micro. Rob’s been at this game a long time. I think he must have built and re-built three or four of these presentation frameworks by now, learning and improving with each iteration. He’s didn’t just wake up yesterday and decide he could write a better framework than everyone else. He’s been writing better frameworks than almost everyone else.

I took him very seriously (and got seriously excited) when he told me about the next generation of Durandal for ECMAScript 6 browsers that are just around the corner. I’ve been tracking his new designs and his progress for several months. This next version of Durandal is going to be great.

What’s so great about it? What’s distinctive about it? Rob has his inventory of laudable features (and its impressive). Here are some of the aspects of nextGen Durandal that I love … and that have no equal among alternative frameworks:

Yes, there are other presentation frameworks out there and I like one or two of them as well. Why get involved with the Durandal project, even if it is great? Shouldn’t we just back “the winner”?

I don’t think we can afford to just sit here and let any one of the frameworks dominate. That’s not good for the web. It wasn’t good when IE6 owned the browser world even if it was the best browser at the time. It won’t be good for the web if today’s favorite owns this presentation framework space either. Frankly, no one has nailed it yet. They all make me itch. It’s too early to declare a winner.

We need to encourage real competition … by which I mean truly well done, distinctive approaches to our common application building problems. Durandal is a worthy competitor. It fosters ideas and techniques that must find their way into our application development practices. Durandal deserves your support. Go give it some love.